EVELYN BENCICOVA
PORTRAIT OF AN ANOMALY 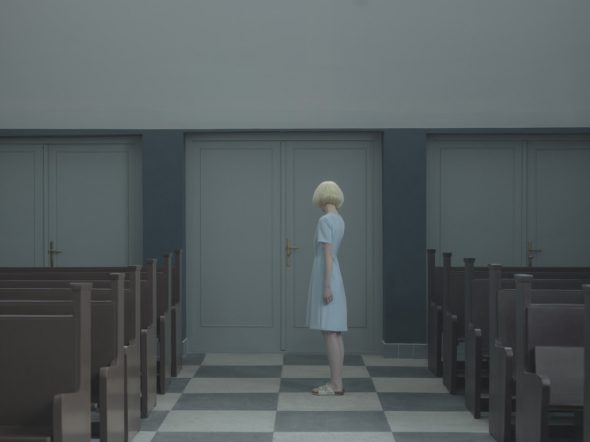 Milan – On Friday 18th October at 6.30 pm, at c|e contemporary was presented “Portrait of an anomaly” the first solo show in Italy of the Slovak visual story-teller Evelyn Bencicova. On show the series “Asymptote”, “Artificial Tears” and “Ecce Homo”

Evelyn Bencicova is a young visual creative, originally from Bratislava and specialized in photography and art direction. Trained in the field of fine arts and new media, thanks to her studies at the University of Applied Arts in Vienna, Evelyn is able to combine her love for contemporary culture with academic study, she creates works in which the conceptual research meets the visual one, giving life to sophisticated and aesthetically perfect settings. Evelyn does not define herself as a photographer as she experiments with different media, including photography, the medium through which she tries to tell her vision of reality.

The artist creates illusions based on reality and, modifying our perception, invites us to enter in the secret labyrinth of her imagination where every scenario hides a deeper meaning compared to the appearance. The soft colors, almost faded, the poses of the subjects and the whole atmosphere of these compositions give the feeling of being in front of surrealistic images. Looking more closely at the scene and its details, we realize that we are not so far away from today’s life.

The “Artificial Tears” series, with which the exhibition begins, was realized in 2017. In this project the artist wonders how the future of artificial intelligence will be, highlighting issues that mankind addresses regarding this matter, might it be dependence, morality or prejudice. The artificial intelligence makes man feel divine as creator of something very powerful but at the same time it makes him clash with his fragility and his mortal being, making him aware he could be replaced by a device. There are many unknowns linked to this problem but Evelyn isolates a particular question: Why does man wants to emphasize so clearly the difference between human being and this avant-garde creation? The artist believes that with progress this distinction will become increasingly blurred and the union between the two species will become absolute, so much so that we will have difficulty in finding differences between man and machine. The protagonist of this series looks like a young woman linked to the perfect idea and the stereotype of her species. It is difficult to define who this model is, it could be a revisited Marilyn Monroe or Tara the Android, or a faceless machine that lives alienated in a clean, elegant future but in which we feel a feeling of restlessness. The observer will understand how the proposed scenarios do not necessarily show a future in which the machine behaves like man but rather, or at the same time, a world in which man acts like an automaton.

The second series on show, “Asymptote”, differs slightly from the artist’s style, although there are still many features related to her surrealistic vision. The photos were taken in architectural structures of the socialist era as the work is a personal interpretation of life in Czechoslovakia of that time. In this series past and present, memory and reality merge. In this case Evelyn studies the current state of society and its values. The artist wants to highlight how there are many points in common between past and present and how each period has to do with the same demons that recur under other guises. The series sheds light on the idea of ​​conformism and exhaustion lived by the characters, who always present themselves in the same poses or with faces hidden by masks to represent the psychological pressure that society exerts on the individual to make it homologated.

The fashion film “Asymptote” (2016), co-created by Evelyn with Adam Csoka Keller and Arielle Esther, acts as a watershed between the two series. A hypnotic and hermetic video in which the photographic works of the Asymptote series by Evelyn Bencicova come to life. The subjects, who move with an unnatural composure, create themselves a model, becoming part of the composition in its entirety. Each person is deprived of his individuality to become a unified form. This path leads to the creation of a scheme of the absurd in which every difference is an anomaly. Individuals are dominated by a foreign force of which they are impotent victims but also accomplices, manifesting it and acting under its impulse. This project tries to connect the national history with the new media trying to shape the historical contents through a personal and intriguing aesthetic vision.

The Artificial Tears series set in a possible future, the Asymptote series linked to a comparison with the past and the series Ecce Homo which reflect instead on the present, face each other in the spaces of c|e contemporary giving life to a surreal and hypnotic exhibition.

The artist’s works are characterized by a different aesthetic from the one we are used to. Aseptic environments and colors, empty spaces, stark atmospheres in which the characters live indecipherable situations, are only some of the elements that describe Evelyn’s work that can only enchant the viewer. The soft, almost faded colors create an atmosphere suspended between past and future which is not exactly our present.

To conclude this visionary exhibition the “Ecce Homo” series in which naked bodies appear in unnatural poses creating geometric, almost architectural structures. Images immersed in the mystery where the human being turns into an object and becomes part of the surrounding furniture. Evelyn tells us about human fragility in a way that is absolutely not obvious. Bare bodies in equally bare environments whose faces are never shown so as to remain generic characters in which everyone can identify themselves. The serie sheds light on man’s instinct to conform and follow the prevalent actions of our society, the behavioural patters which are portrayed in a very abstract, simplified way.

In 2016, she won the prestigious Hasselblad Masters and Broncolor GenNext awards. She was also pre-selected and awarded by LensCulture, Independent Photographer, Gomma Grant, Spotlight awards,Life Framer, Tokyo International Photo Award and OFF Festival. Evelyn was included by Artpil among the 30 under 30 / women photographers.