OPENING Thursday,11th October 2018 from 6.30 to 9 p.m.
The artist will be present and at your disposal for interviews

Milan – Thursday, 11th October will be inaugurated, at c|e Contemporary, the first Italian personal exhibition of the artist photographer Rania Matar, born in Lebanon, naturalized American citizen and living in Boston.
Carrying out architecture studies Rania Matar decided to fully dedicate herself to photography and to teaching at Massachusetts College of art and deign.
Her works focus on women and children, born in the U.S. or in the Middle East, all of them searching for a personal identity. 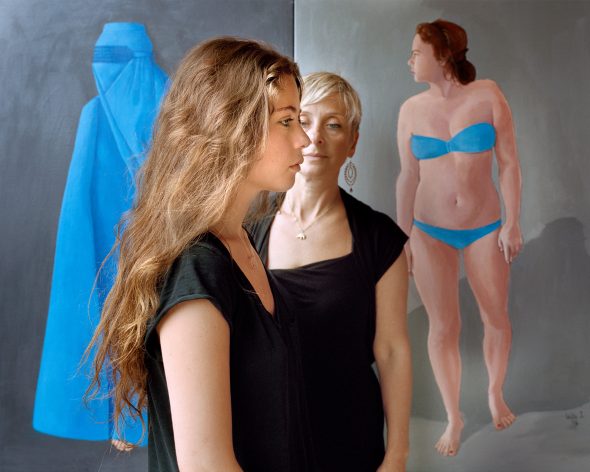 Rania Matar’s philosophy analyzes, through portrait, whether it’s indoor or outdoor, the stages of evolution of the feminine subject, starting from behavior, clothes, spaces and ways of having fun. Artist’s work reveals how evolution of feminine identity of youngsters from such different parts of the world transcend cultural and geographic barriers.
It’s the look of a woman, of an artist, of a mother, of a former teenager the one filtered by Rania Matar’s lens, picking up world’s mirror, of a forming mentality, of the environmental pattern, specifically both the American and the Middle Eastern one, such as the one of the feminine subject of pre-adolescence and teens. These works reflect the observational and interpretational capacity of a context full of dreams of a subject took in the moment of passage between childhood and adulthood, and in the progressive acquisition of awareness of becoming a woman of today.

Artist’s works are preserved in several permanent collections all over the world.

In 2018 Rania Matar won the Guggenheim Fellowship which is a grant that has been awarded annually since 1925 by the John Simon Guggenheim Memorial Foundation to those “who have demonstrated exceptional capacity for productive scholarship or exceptional creative ability in the arts”.

The set up of the spaces at c|e Contemporary is structured on a sequence of five thematic proposals, in order to give the visitors a 360 degree approach to artist’s work.

In the Enfant-Femme series are presented singular portraits linked to childhood, images of little girls transitioning to a teenage phase.
The spontaneous poses highlight the girls femininity, sometimes made-up, sometimes wearing adult clothes. The only indication given by the artist is the one of not laughing and putting theirselves at ease, assuming natural poses. The project consists in capturing their emotions: anxiety, distress and safety. The works reflect body language, the evolution of personality and the initial test of their feminine appeal.
Rania Matar then adds the series Becoming, the natural continuation of the series the Enfant Femme. Here there are the same subjects, photographed years later in the same place, to represent one of the recurring themes of the artist’s work: the passing of time. Using the medium format film camera, the girls could not immediately see the result of the photographs. This “inconvenience”convinced them to face the photo session more seriously. The subjects photographed in the previous series between the ages of 9 and 12 are in this case portrayed between the ages of 13 and 16 and the change is overwhelming. Moving and at the same time captivating is noticing changes not only on the physical level, through body language, hand gestures, feet position, but above all on the level of personality.

Unspoken Conversation concentrates and emphasizes the theme of the inexorable flow of time and of the relationship between mother and daughter. The photographs reveal the different family relationships. In some cases we perceive tenderness and affection in others the shot shows a situation of tension and competition between mother and daughter. In this photographic cycle, femininity is explored in the two important stages of life : adolescence and middle age. The analysis of Rania Matar focuses on the essence of the subjects, on physicality, vulnerability, on the moment of growth and on ageing. Analogies and apparent cultural differences converge towards the beauty of a common humanity.

In the body of photographs She we find young women sometimes photographed younger for other series. Women who look intensely at the lens or whose absorbed gaze is lost towards the horizon. Girls aware of belonging to the adult world and probably thoughtful because of this new phase of their life. The artist investigates what it means to be a girl, a woman. Rania Matar focuses on young women, the ages of her daughters, who have to face a new reality for which they are not still prepared. A reality that, very often, isn’t as reassuring and glamorous as it’s made out by social media. In these shots are portrayed the raw beauty of their age, their vulnerability, their identity, a growing individuality that belongs to all mankind. The artist wants to go beyond the artificiality of the photos that the girls publish on social media, portraying them through her vision of mother, photographer, woman, with no “filter”.

In Girl in Her Room series, presented in a small preview on the occasion of the Photo Week 2018, at c|e Contemporary gallery, and presented in this personal exhibition in a limited version, Rania Matar portrays teenage girls surrounded by their personal objects, as important components in their maturation and growth. The artist initially let her subjects chose the place where they wanted to be portrayed. Having some of them opted for their own bedroom, Rania Matar sensed that this could be the starting point for a project. The idea initially took shape with photographs of his daughters, their friends or girls that the artist already knew, and then go further, choosing unknown girls, building with them a photographer / model relationship. Rania Matar always spends time with her subjects so they feel comfortable, creating a beautiful and intimate collaboration. The early shots of this series portrayed only American teenagers, the photographic project has then evolved including also Middle Eastern girls: two worlds familiar to Rania Matar as she experienced them, firsthand, as a young woman.